Cave Drills Are Enough to Give You a Fright!

Taking a journey into the earth is a "boring" adventure.

Before you read this post, you should know that this story is not subterranean fiction. There is a lot of truth to this story. If you are afraid of large sharp teeth or dark spaces, we advise you to go back to your regular work day - do NOT read any further. Simply exit this page. We’ll catch you on the next post. However, if you have a sense of adventure, embrace natural hazards, and have a curious mind, then we hope you will join us on our journey into the earth. 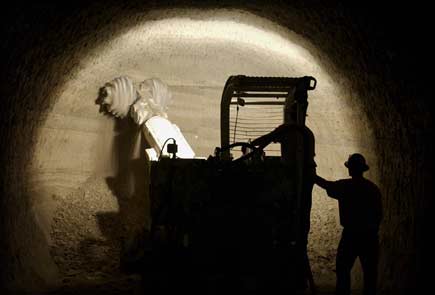 Our story begins with an individual who believes a cave is the perfect space to produce, store, and share wine. This person decides to engage a team to act as a guide to descend into the earth. For this story, let’s call this individual, Doctor Decanter. The ambitious doctor does not want to wait forever to build a cave; the doctor wants this space for next year’s vintage. Cautiously, the team provides a few theories on what to expect on their journey based on their knowledge of the earth’s geology. All in all, the team concludes that journey is possible. In effect, the site was favorable from a geological standpoint. The doctor rejoices, “Great! How do we get started?” That's when the team tells the doctor that they will need to get a roadheader to penetrate the earth.

What is a Roadheader?

A roadheader is a piece of excavating equipment consisting of a boom-mounted cutting head, a loading device usually involving a conveyor, and a crawler traveling track to move the entire machine forward into the rock face. The cutting head can be a general purpose rotating drum mounted in line or perpendicular to the boom, or can be special function heads such as jack-hammer like spikes, compression fracture micro-wheel heads like those on larger tunnel boring machines, a slicer head like a gigantic chain saw for dicing up rock.

At first, the doctor was a bit intimidated by what appeared to be a large machine with many sharp teeth. However, this intimidation lasted for a brief moment as it was quickly realized that this machine could effectively dig into the earth within the required time frame. Excited about the future, the doctor told the team to proceed.

Descending into the earth, the team began to carefully excavate the tunnel without having it collapse around them. Powered by 480 volts of power, the roadheader bored into the earth, grinding away at a rate of two to fifteen feet per day.  The roadheader's teeth tore away everything in it's path unearthing car sized boulders from the cave ceilings. Excavated material was constantly being removed from the tunnel by a loader or a load-haul-dump mining machine.

As they excavated, the team encountered many strange phenomena, including color striations and subterranean springs. Alarms sounded and the team excavated the cave to avoid hazardous and, sometimes, flammable gasses such as methane and hydrogen sulfide. There was one occasion when the team tapped into strata soft enough, like running sand, that it would have trapped the machinery and crew.  It was not long after this jarring experience that the team heard a distinct tap...tap, tap.  Someone said the sound could have come from a tommyknocker.  Fortunately for us, these spirits tend to be friendly and provide warnings of cave-ins.

After each day's excavation, the tunnel was sprayed with shotcrete flash coating, a concrete mixture adding support. After several months of excavation, they finally break through. Utilities were installed and a final coating of shotcrete was applied. When the cave liner was completely in place, floor drainage and utility tie-ins were completed. A concrete floor slab and door structures were installed allowing for a secure, functioning facility.

As frightening as the roadheader may be, the machine was an invaluable tool for excavating Doctor Decanter's wine cave. Each excavation resulted in new, natural discoveries that may have never been seen without it's use. While the end result was a wine cave, the means and methods to get there was an adventure.

Taking a journey into the earth is a boring adventure. Have you ever excavated a cave before? Share your adventure with us in the comments section below.